Yesterday, the NetBeez team presented at TFDx Cisco Live 2019. In our one hour time slot, we presented the most recent product updates, including the newly released integration with the Catalyst 9300 series switch. Panos talked about the ‘Yin and Yang of Bad WiFi’ while doing a live demo of the Netbeez dashboard. We also had a special guest, Surya Raju, Product Manager of the Cisco Enterprise Switching division. Surya introduced the new Cisco application hosting environment available on Catalyst switches. If you missed the live streaming, you can watch the recorded videos on the Tech Field Day website. There, you’ll find three sessions.

“It’s not the network”: How NetBeez Removes the Mystery from Networking

In this session I introduced NetBeez for those who didn’t know about us; I highlighted four use cases in which NetBeez supports network engineers in their day-to-day operations: 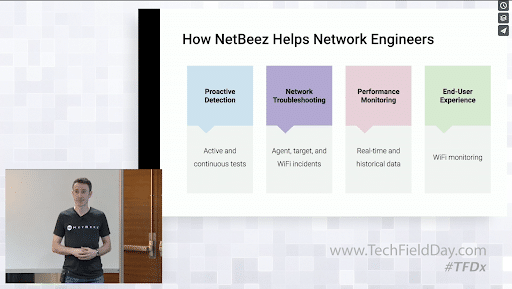 In the last part of the presentation, I talked about the public APIs that can be used to gather network performance metrics from the NetBeez central server. This data is then shared with third-party applications or published to external users via service status dashboards; a basic template of a public service status dashboard using the NetBeez APIs can be downloaded on github at the URL https://github.com/netbeez/public-dashboard. This session is divided into two sections: Part I and Part II. In the first one, Surya introduced the “Application Hosting on Catalyst 9000 series switches” that is based on Docker and will be available starting with IOS-XE version 16.12.1. The Catalyst 9300 is the first series of Catalyst switches that will run this new environment. In successive IOS-XE releases, it will be extended to 9400 series, and other platforms. Important to note is that, to enable App Hosting, a 120G-SSD is needed to store the applications installed. Surya also provided a demonstration of the deployment of the NetBeez agent as a Cisco Catalyst application via the Cisco DNA Center platform. In Part II of the session, I explained the benefits of the NetBeez/Cisco integration. This integration will ease the deployment and management of NetBeez agents in large and distributed WANs. I then showed a diagram that shows the architecture of application hosting on Catalyst 9000 switches. The diagram, and manual configuration is available on the NetBeez documentation. In this session, Panos Vouzis introduced NetBeez’s solution to troubleshooting WiFi performance issues. Not all the problems that end-users are experiencing are necessarily related to #BadWiFi. Panos talked about the eternal disconnect between what the end-user perceives a network problem to be, and what the actual problem is. Monitoring the WiFi from the client’s perspective provides real data to identify real network problems. Other times, WiFi monitoring data is simply needed to prove that it’s not the network, and then escalate such issues to other stakeholders of the IT infrastructure, including service providers, or application owners. In the last part of his session, Panos mentioned the latest and greatest WiFi features released in the last NetBeez releases, such as the WiFi network tab, SSID hopping, and the new WiFi agent. The new WiFi Beez got good feedback from the TFDx delegates. We have to thank the Tech Field Day delegates, Gestalt IT staff, and Surya Raju from Cisco for making this TFDx session memorable. The NetBeez team was very happy to share with the networking world all the hard work put in the past months to provide network and wireless engineers a solution that eases their daily operations, improving network performance and IT uptime.