Cloud-based telephony enables companies to implement Voice-over-IP (VoIP) services by relying on a third party provider that handles the hosting and management of the PBX. Simply put, throw away your PBX and keep only the handhelds.

When compared to traditional on-premise PBX deployment, this cloud-based solution is getting a lot of traction with enterprises because it introduces operational efficiencies and keeps costs contained and transparent. However, at the same time, it requires new monitoring strategies, such as distributed network monitoring.

From a networking perspective, the communication pattern between VoIP endpoints (handhelds, softphones) and PBX is moving from a centralized model, where the PBX is located at the data center, to a distributed one, where the PBX is in the cloud. In fact, if we look at legacy voice and data deployments, you would generally find: 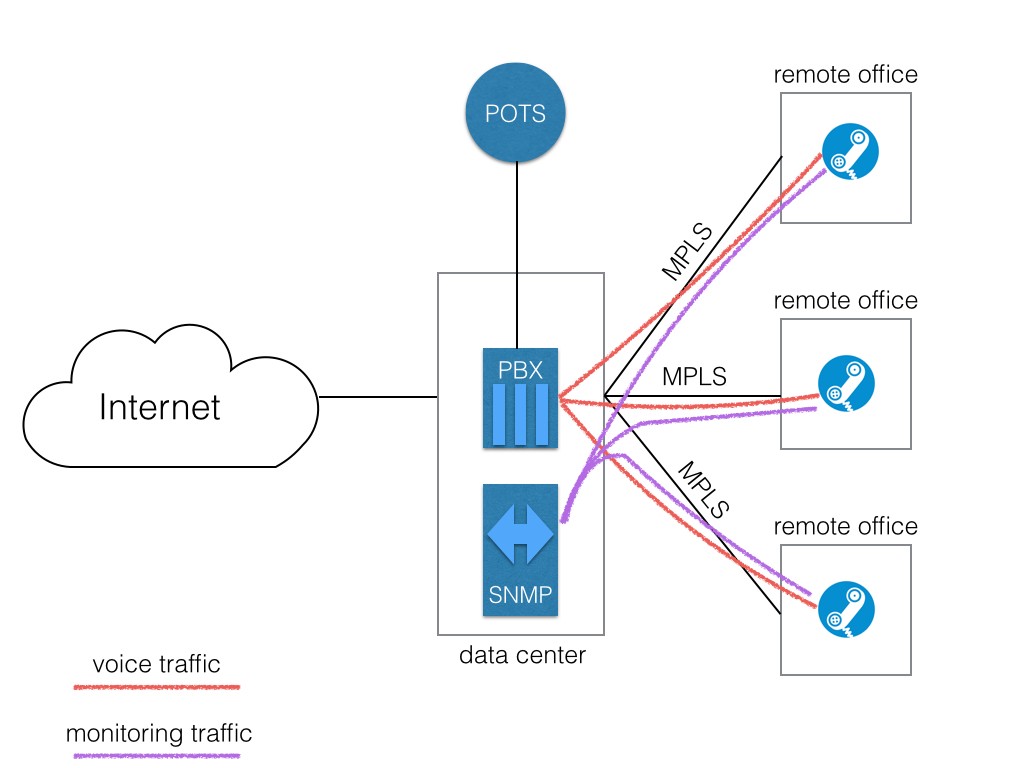 On-premise VoIP deployment with PBX at the data center and remote offices connected with MPLS.

On the other hand, in new WAN environments, the design is changing and moving towards the following model: Where centralized network monitoring fails in a managed telephony deployment where the PBX is hosted by third party and corporate offices have a direct connection to the Internet.

In split tunneling environments, remote users establish connectivity with a cloud-PBX via the local Internet connection and not a private tunnel established with the headquarters. This means that a monitoring server located at a central point, like the data center, cannot verify remote users’ performance towards Internet destinations, including the managed telephony provider.

So why is distributed network monitoring needed?

To overcome this limitation, network managers will have to deploy active monitoring agents at remote locations. The agents execute performance tests toward the cloud-based services to provide quick detection should network or application performance issues arise. A solution like NetBeez does this and constantly verifies that all locations have good performance to intranet and Internet destinations. The data stream processing engine included in the NetBeez central server, proactively detects performance degradation issues so that network managers can be on top of the game before those issues affect the end users. I would like to hear your feedback on this topic. If you are interested in learning more about how you can achieve such capability with NetBeez, request a product tour.