NFV (Network Function Virtualization) uses machine virtualization to abstract network services such as content filtering, load balancing, etc. Such services are referred to as Virtualized Network Functions (VNF) and replace the function of dedicated appliances. Instead of using standalone and sometimes purpose-built hardware, VNF services run on top of generic x86 or ARM systems. As a result, NFV simplifies setup and installation of network services, while reducing upfront as well as maintenance costs. NFV also makes it possible to deploy a wider range of services and applications. ETSI established the NFV Industry Specification Group (ISG) 8 years ago. To date, many networking vendors include this technology in their product lines, sometimes referred to as application hosting. NFV has also sparked new approaches to networking, such as SDN and SD-WAN. Lastly, this technology had an impact on the ecosystem, causing traditional software companies like VMware to start competing in the networking market. Clearly, NFV is more than a marketing buzzword: it’s a well-established architecture that is supporting today’s networks and services.

NFV disrupts the network infrastructure market. It creates a lower barrier to entry to Independent Software Vendors that don’t have to deal with hardware investments to enter the market. If software is eating the world, NFV is accelerating innovation and technology advancement.

From an ROI perspective, large telcos and internet service providers are the first ones to have recognized the many benefits of NFV; it greatly reduces costs associated with the deployment and operation of their large infrastructure. Cost reductions include: less hardware to purchase and maintain, less rack space required, lower electricity bills thanks to hardware consolidation, less truck rolls to install and replace hardware, less cables to run, …. What about enterprises? As networking vendors started including support for virtual machines and software containers on their platforms, similar benefits became available to enterprises. Let’s review the case for running NetBeez as a virtual service.

NetBeez as a VNF

Currently, most networking vendors support two platforms: Linux KVM for virtual machines and Docker for software containers. Put simply, if an application is available in those formats, it can be deployed as a VNF.

Since the NetBeez agent can run as a KVM virtual machine and as Docker software container, support for NFV comes for free. In 2016, NetBeez could run as a Cisco ISR service, which is based on KVM. In 2019, NetBeez was one of the first applications officially supported on the Cisco Catalyst 9000 series as a Docker image. 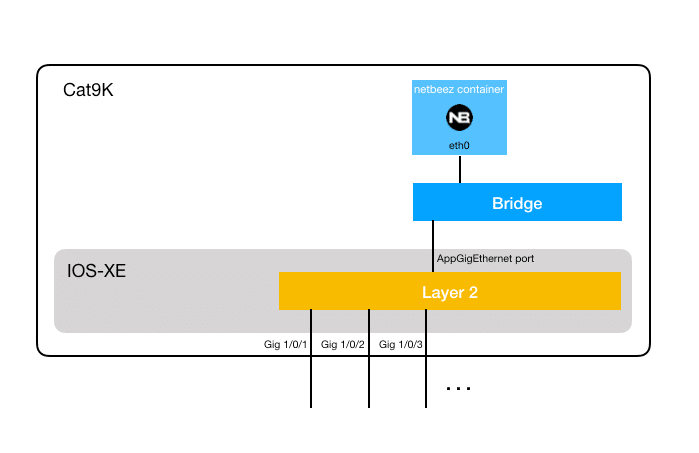 NetBeez Running as a Docker container on a Cisco Catalyst 9000 series switch.

Before support for VNF was available by most networking vendors, the Raspberry Pi’s lower cost and compute power offered the only viable option to deploy NetBeez’s distributed network monitoring solution in a WAN. Although the Raspberry Pi is a small form factor, it still requires physical installation and a dedicated switch port.

Running NetBeez as a virtual service enables distributed organizations that manage large WANs to efficiently deploy and manage remote network monitoring sensors at scale. As a result, NetBeez deployments on networking vendors that support virtualization have steadily increased. Below is a partial list of vendors and models of which NetBeez is currently deployed:

If you want to read more about WAN monitoring, download the white paper “How to Monitor your WAN”.

We can help your team get strategic again.