Virtual Private Networks are encrypted and authenticated connections established between two hosts across an insecure and public network, namely the Internet. These connections enable remote workers and frequent travelers to access private and internal company resources from an external location such as a home environment, or coffee shop. In this scenario, one end of the tunnel is the user’s computer running a VPN client, while on the other end there’s a VPN server (or VPN concentrator) located at a corporate site.

VPN tunnel across the Internet

A LAN-to-LAN connection is another type of VPN . In this setup, two endpoints establish a VPN tunnel to enable several users at each location to access resources on the other side of the tunnel. The main difference from the previous configuration is that here, the two endpoints are VPN routers located in two geographically separate corporate facilities. For the network users, this setup is transparent. That is, they don’t need to install any VPN client on their computers because the VPN configuration is applied to the routers.

How to VPN with NetBeez

Let me present a method for monitoring your VPN with NetBeez.  This monitoring method covers the first type of VPN setup.  The setup is fairly simple and can be implemented for free. It took me no more than twenty minutes (excluding the time needed to download the software involved). With this procedure, I am looking to validate the availability and performance of the VPN service that is established between a user’s computer and VPN concentrator.

There are different VPN technologies used by companies today. Here are some examples:

To monitor your VPN service, you will need the following resources:

Simple, remote and from the user perspective network monitoring.

After the setup, you will be able to:

Setup NetBeez to Monitor a VPN 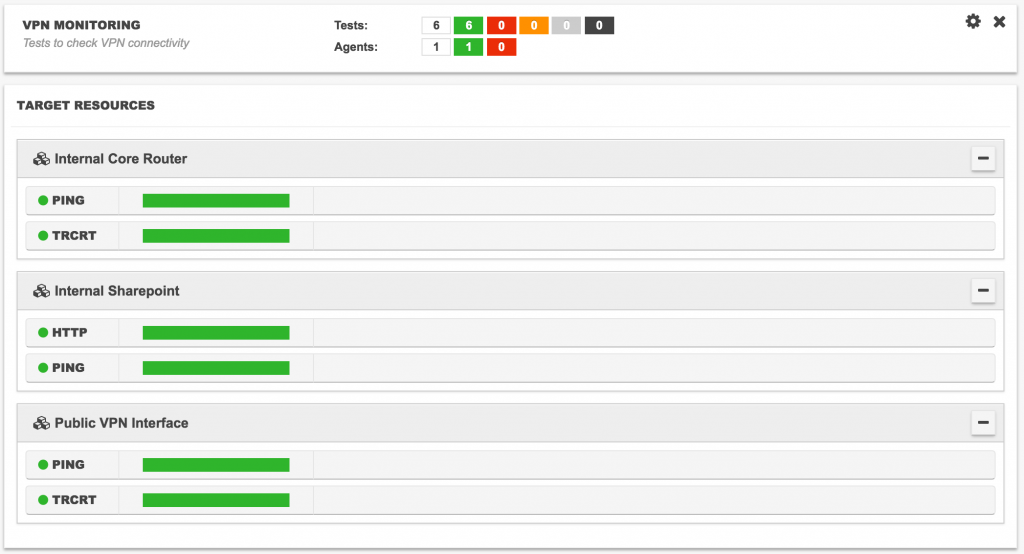 I hope this post provided a starting point to start monitoring your VPN service in a simple yet effective way. This setup will allow you to detect when the VPN service is unavailable to your remote users. If you want to learn more about this configuration, or just need help in the setup, feel free to reach out by scheduling a demo with me.