A recent survey of 60 firms (with more than 25 offices as identified by Automata) suggests that remote users may be assuming more responsibility for reporting potential network issues than when they were working from the office.

This new reality didn’t have a material impact on network teams’ level of satisfaction for their existing monitoring gear, even as they recognized the importance of network reliability to application performance.

The survey was launched in March 2020 and completed in June, during the first wave of the COVID-19 pandemic. Over the period of the survey, network teams became more dependent upon users to identify network issues.

Question posed by the findings: Will network monitoring tools see a drop in satisfaction when it becomes clear that they are missing an increasing percentage of user problems and forcing teams to react and diagnose remote problems they couldn’t detect in the first place? It seems very likely they’ll be spending more time on root cause analysis in support of an increasingly dispersed #WFH workforce. Nine respondents rated WAN reliability as only of moderate or even low importance, suggesting their organizations might still be using traditional desktop apps. Respondents reported high satisfaction with their existing tools, with almost 72% rating their satisfaction at 8 or higher on a 10 point scale. While the results weren’t as clustered at the high end of the range like WAN reliability, it’s still great news for vendors. Network executives are, on balance, satisfied with their network monitoring tools.

Over time, the data reveals an increasing reliance upon end users for problems and the recognition by network teams that their tools were not catching many of the problems before users identified them.

Respondents reported  a high level of dependence upon user incident reporting AND high levels of satisfaction with monitoring tools. Almost half of those surveyed frequently depended upon users for reporting problems. Their monitoring tools may indeed be highly satisfactory but they still require teams to be significantly reactive to user complaints. Since their tools could not discover the problem it is likely that they would be of limited usefulness in diagnosing root cause.

Clearly with the shift to remote users network team expectations may need to change.  With more employees working remote relying upon user complaints to identify problems will face serious scale and resource problems. This may shift the network monitoring requirements to include user experience, but the research at this stage only shows a high (and increasing) reliance upon user reporting but no such trend when it comes to monitoring tool satisfaction. 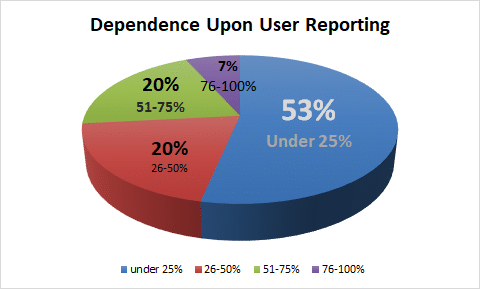 The timing of the surveys produced a material change in answers when it came to the frequency of user-initiated issues. This survey was started in March 2020,  as the first wave of the pandemic hit. You can see that as remote work spread so did dependence upon user complaints to address network issues. Based on a range of 1-4, with 1 representing under 24% of complaints filed by users and 4 representing 75-100% of complaints filed by users, we found a 25%+ increase in frequency of user complaints, likely showing the effects of remote workers on network teams and their monitoring tools. What remains to be seen is whether or not this trend will continue with the average of user complaints shifting from under 25% to 25-50% of the time as more companies deploy remote worker initiatives.

Will network monitoring tools see a drop in satisfaction as it becomes clear they are missing an increasing percentage of user problems and forcing teams to react to problems and diagnose them with tools that couldn’t detect them in the first place? Or will these teams simply accept being more dependent upon user complaints and expending more time and resources on root cause analysis?