Windows 11 was released on October 5, 2021 and the initial announcement shocked the world as Microsoft implied that Windows 10 would be the last major OS release. Windows 11 upgrade is free (for now) but not everyone can upgrade. In fact, if your device is more than a few generations old, you may not be able to upgrade directly…

Why does Windows 11 exist?

There are many reasons why but 2 big ones stick out. MAC devices are becoming more affordable thanks to the new M1 chip and they perform as well if not better than the Windows counterparts. According to this graph from statista.com, 47% of Americans own an iPhone in 2021. And with the ecosystem of Apple pushing more and more people to move to Apple, Microsoft wanted to do an overhaul of the UI. 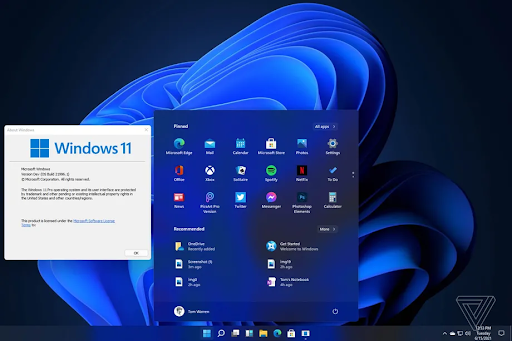 As you can see above, the UI really is beginning to mimic what Apple’s desktop looks like. The menu at the bottom of the screen.

The other reason we keep hearing is security. With the requirement of a TPM on the motherboard and secure boot in the UEFI Bios (more of these later), Windows 11 will only allow trusted drivers to be installed. Microsoft has stated that a bulk of malware and malicious software that infects PCs would be stopped by these measures in place. But as many of you know, it’s only a matter of time for these security protocols to be circumvented.

A few acronyms were mentioned above that need a bit more explanation. These include TPM, UEFI and Secure Boot. Then we will tie it all back to the security requirements.

TPM – This is short for “Trusted Platform Module” is a little chip that gets placed on the motherboard that protects encrypted data and credentials. If you use encryption such as Bitlocker, this is a requirement for that feature to function properly. Fortunately, they have been built into the firmware of motherboards for about 5-6 years, which is why some older systems will not be able to run Windows 11.

Secure Boot – This is a feature in modern UEFI bios that require Microsoft’s authorized keys for software, firmware and drivers to be installed. Each time the system boots up, this feature checks these items that are loaded to verify their authenticity.

UEFI – Is short for Unified Extensible Firmware Interface and in its most basic form is a bios system with a graphical user interface (GUI). This is required for Windows 11 as features like secure boot are often not offered in legacy bios (think the blue screen with yellow text).

When looking at the system requirements, you would think that any PC from 2008 and newer could run it. And you’re not wrong, from a performance standpoint. I recommend checking out the video from Linus Tech Tips called “DON’T buy a new PC for Windows 11! – How to install” where they got Windows 11 installed and working well on very old hardware. But the system requirements are:

But then, why is the oldest AMD CPU (Ryzen 2000) supported from April of 2018 and for Intel (8000 series) October of 2017? If you recall, a few years ago there were many side channel exploits into Intel and to a lesser extent AMD processors such as Meltdown and Spectre. Microsoft claims that CPUs older than the ones supported lack the security requirements necessary. The other reason according to a blog post they published is that reliability is important.

“Devices that do not meet the minimum system requirements had 52% more kernel mode crashes. Devices that do meet the minimum system requirements had a 99.8% crash free experience.”Microsoft did say they are considering 7th generation Intel and 1st Generation AMD Ryzen processors for support due to backlash from the public, but that may require them to lower their standards on reliability, security and compatibility.

Should I upgrade to Windows 11?

The good news is, Windows 11 is built on the same foundation as Windows 10. That means software developers should have an easier time porting to Windows 11 without much difficulty. Support and performance should not be an issue, especially since modern hardware is required. The increased security is also a huge plus as well. But many people are skeptical.

Truthfully, the more technical people are often the most hesitant. A brief history may explain why. Microsoft does a tik-tok method of releases. One good OS followed by a bad one. Here are examples:

But from early reports, Windows 11 does not require any more power than Windows 10. And those who have found backdoor ways and installed it on systems from as old as 2008 said it feels just fine performance-wise.

Microsoft did not reinvent the wheel with Windows 11. The core under the hood is based off of Windows 10 and the UI doesn’t seem to be nearly as changed compared to going from Windows 7 to 8.

Windows 10 Home and Pro will end support on October 14, 2025. At the time of writing, the current Version 21H1 ends support and updates on December 13, 2022, so there will be several more updates required to maintain support and security updates.  But know this, the decision whether to upgrade or not is not a decision that you have to make today!